Music from the West of Ireland with passionate vocals and dazzling instrumentals.

The Sligo Borough Council’s decision to award Dervish the Freedom of the Borough of Sligo cemented the group’s position as preeminent band in Ireland’s wild west. It raised them into the exalted company of poet W.B. Yeats, who was the first person to be awarded the Freedom of Sligo.
Built upon two sturdy pillars—the hauntingly charismatic vocals of Cathy Jordan and the dazzling virtuosity of award-winning instrumentalists like Tom Morrow on fiddle, Liam Kelly on flute, and Shane Mitchell on accordion—Dervish is a solid structure of a band, its foundation in legendary pub sessions, its shape the result of years of international touring. In the most recent of many honors, Dervish was recently chosen to represent Ireland in the Eurovision Song Contest. In 2005, just after the group toured China in the company of the Prime Minister, Ireland’s premier music magazine Hot Press voted the band Best Traditional / Folk Group.

The solid rhythm playing of Brian McDonagh and Michael Holmes drives the band, whose concert performances are a myriad of tones and moods ranging from high energy tunes, played with fluidity and intuitiveness, to beautifully measured songs, from charming lyrics of life and love, to inspiring melodies that lift audiences from their seats. All the elements are drawn together by Cathy Jordan’s masterful stage presence. Her stories to the songs and her interaction with the audience draws people into the music in a way very few performers can achieve. All this can be found in their fourth album Live in Palma, recorded before a captivated audience at Palma de Mallorca’s “Teatre Principal”. Other recordings include A Healing Heart (2005), Spirit (2003), the retrospective Decade (2001), Midsummer’s Night (1999), At the End of the Day (1996), Playing with Fire (1995), and Harmony Hill (1993).
Now, more than twenty years since first coming together and with four of the original members still at the helm, Dervish are more in demand than ever. Their colorful career has taken them to every corner of the globe and has seen them share center stage with such names as James Brown, The Buena Vista Social Club, Oasis, Sting, REM, Beck and many more. Dervish is a band that both celebrates Irish music and has been instrumental in bringing it to a worldwide audience.
Belleville church, a white Gothic-style church; image is a black and white drawing 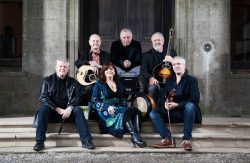